So much has happened since I left off and I have no idea where to begin. I will just start with something.

Back in the spring covid shut everything down, it looked as if I would not be able to travel to the TransPecos with the Maggie Mee to work on the devils claw project. Parks were closed, travel was scary, and it seemed prudent to hunker down. But all was not lost. Botanist Michael Eason—author of Wildflowers of Texas and with whom I have consulted on this project—sent me some seedpods for two species of Proboscidea, louisianica ssp. ‘fragrans’ and altheaifolia. I spent an evening with a couple pairs of pliers wrestling the seeds from their grasp and planted them. This was difficult, as the seedpods did not want to give them up. Nevertheless, I persisted, with a little cursing, and eventually got more than enough to plant. (Fragrans is shown here with some seeds from a Native American cultivar of parviflora, to illustrate the difference in seed color.) 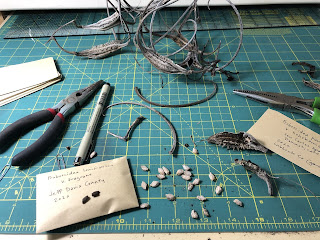 As it turned out, it as a good thing I had so many seeds, because, as was the case last year, I had a dickens of a time getting them to germinate. I did, however, get one specimen of each. I’m going to talk about them in separate posts, however, otherwise This will get to be too long. Suffice it to say that it took some effort to get both these plants to survive, bloom, and set fruit.
Altheaifolia is unusual in that, unlike the other species of Proboscidea, it is a perennial. This was going to present a problem with our winters here in the panhandle, since its natural habitat is much further south. So I planted it in a lightweight pot with the intention of moving it into the small greenhouse I have to overwinter. Here it is as an infant, looking alarmingly (to my eyes) fragile, spindly, and ready to succumb to all that life can throw at it: 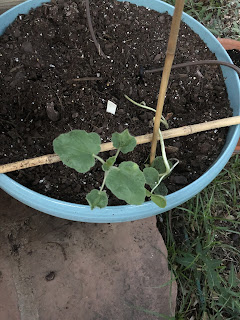 It would not be too much of an exaggeration to say that I held my breath the entire summer hoping this plant would survive.
But survive it did, and grew, though it was somewhat leggy compared to one grown in the wild. Michael Eason suggested this might be because it did not get enough sun, and that seems likely, since I had grown it in part shade in order to hook it up to some automatic drip I already had there.
It also did not bloom all summer. But since it is a perennial, I wasn’t too worried, thinking it might be more likely to next summer.
And now here it is Fall. I moved the altheaifolia into the greenhouse about a month ago, and lo and behold, the extra sun and warmth there coaxed a bloom! And then another! And there are four additional buds growing on the stems. 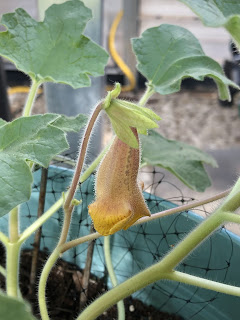 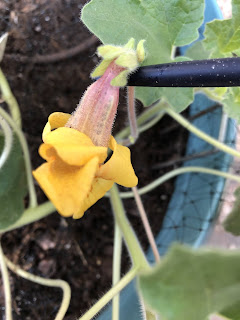 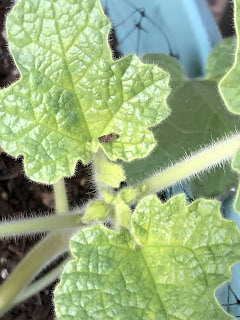 The flower is a striking color—sort of Indian Yellow, with shades of purple. It will be nice to paint it. I learned from the fragrans this summer that though the Proboscidea are self-pollinating, I did not seem to have the right pollinator for the plant to bear fruit. So I helped it along with the paint brush, with good success. I worried about the same being true with the altheaifolia, so I did the same: 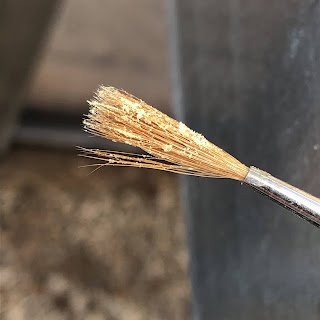 I’ll post updates on the plant as it progresses.
Tomorrow is predicted to be our first freeze, but the greenhouse heater is working, and everything is buttoned down, so hopefully the plant will be happy and continue blooming and produce some fruit.
at October 24, 2020

New comments are not allowed.