If it is Saturday, it must be time to work on the Maggie Mee

A chilly fall morning, but it promises to warm up to 75° F later today. I am building countertops for the galley, one which will fold out to form a place to prep food, and the other to slide out for the stove. Both of these will allow me to cook without bending awkwardly at the hips—something that should be more comfortable for my lower back.

This morning I am cut rounded corners on the countertops (mainly to minimize the pain if I run into them) using the bandsaw, and now I am dry-fitting to see which arrangment I prefer. (I think I prefer the stove on the right; it suits my left-handeness better.)

Later today, after it warms up, I’ll laminate the countertops. Tomorrow I’ll put an additinal coat of spar polyurethane on the undersides (they already have two coats). I’ve ordered aluminum trim for the edges, which should give it all a nice retro-diner look.

Here is the “before” of the galley: 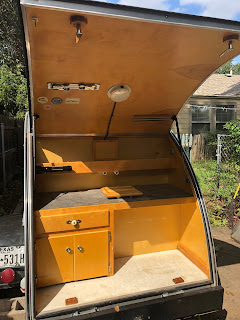 And here is what I am working on today: 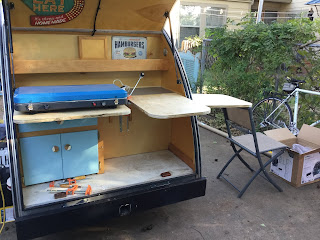 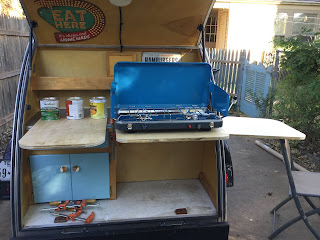 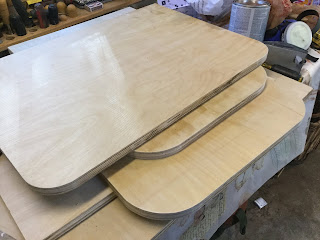 A couple of months ago I got it into my head that I needed a teardrop camper to do some botanical art field work. I have a big project I am going to start next year in the Trans Pecos of Texas, and plan to spend several weeks down there. Camping would be the cheapest way to do that, but I have done a lot of tent camping in my life, and I am here to tell you that I am finished with that chapter. I am tired of sleeping on the ground, tired of tent poles collapsing in my face during storms, tired of trying to pull on my pants while lying down, tired of never being able to find things in the dark. Tired of it all. Plus, I am 62 years old and not as bendy as I used to be.

So I was casting about for solutions and posted a query on my Facebook feed about teardrops. Almost immediately a neighbor replied that she and her family were thinking of selling theirs. Now, these days a teardrop can run you around $10,000-$20,000, and they can also come with all kinds of amenities, like teevees, and air conditioners, and built-in stoves and refrigerators, and even showers. I couldn't afford to spend that amount, and I didn't really need any of those luxuries--I was just looking for a way to avoid sleeping on the ground. This teardrop, as it turned out when I went to look at it, had none of those things; it was a 2007 model, and basically just a bed on wheels, with electricity. Best of all, the price my neighbors hinted at was about what I could expect to pay if I stayed in a hotel during my field work. If I bought the camper, however, I would still have it at the end of my project, ready for other field excursions. Or, even if I never took it out to the field again, I could sell it and recoup my cost.

Plus, people who have known me a long time know I love a good project, and looking the camper over, I could see all kinds of possibilities to refurbish and customize her.

Well, I am old enough to recognize karma when I see it, so we made a deal and she was mine (well, sort of mine--there is a little problem with a lost title, but that is a post for another day).

Right away I named her "The Margaret Mee," after the famed and intrepid botanical artist who did so much for the Amazon. The same people who know I love a good project also know that I am not intrepid in the least little bit. But maybe by naming the teardrop camper after her, some of Margaret Mee's bravery will rub off on me. We shall see.

Anyway, it feels like the beginning of an adventure--the project and the fixing up of the old teardrop, both--and I invite you to follow along.