Meanwhile, far from the madding crowd: The Cotton Project, Part One

The past few days in this country have left me dispirited and unable to sleep. So I decided to come here to the blog and post about something good, decent, and non-political in hopes of quieting my soul.

It’s my habit every morning, shortly after I get up, to go out to the greenhouse to check on the cotton project plants. I haven’t written much about this project on the blog, but in short, it is a series of paintings about different species of cotton that I am working on. Did you know that there are over fifty species in this genus? We tend to use only one for 96% of all commercial production for textiles (Gossypium hirsutum). The other, roughly 4% is Gossypium barbadense, more commonly known as “Pima” cotton. Here are a couple of works in progress—the top one is a commercial variety of hirsutum, and the bottom is barbadense: 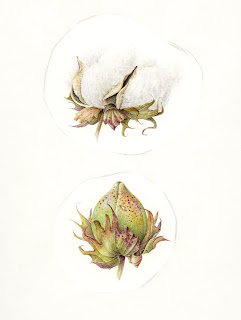 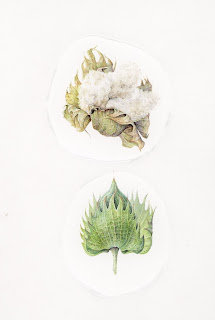 I may write more about these two species in the future. Today’s is another story.

Over on the north side of town, Texas A&M has a large research facility, called “Agrilife.” It happens that among other things they do, they have a large seed bank of most of the different species, from all over the world. When we think of a cotton plant, we imagine it looking only one way. But it turns out, the genus is highly varied in its morphology. As a part of the cotton project, I searched around for specimens, and readily found five or six being grown for research. Since we live in cotton country (something like 15% of the world’s commercial cotton is grown here), there is naturally a lot of important cotton research being done in town. But the more esoteric species (read: “not economically useful”) just aren’t available or easily accessible “in the flesh” (that is, I can find photos, but it is hard to do a good botanical painting this way—the live specimen is ideal). Eventually I came to the conclusion that if I wanted specimens to paint, I was going to have to grow them myself.

Now, I am a middling gardener, at best. My garden philosophy goes something like this: “I’ll put you in the ground, get you started, and then you are on your own for the remainder of your natural life.” As you might imagine, this approach has its limits, especially in a land of little rain.

But I do have a greenhouse, albeit one mainly used for overwintering some less hardy cactus. (Cactus are great for gardeners like me, in that they like to be left alone. See also: “Thorns.”) In addition to the greenhouse, I have some garden space with plenty of full sun and drip irrigation, normally devoted to growing tomatoes and peppers. Both of these spaces lend themselves to the possibility of creating my own bijou cotton farmlet. So I decided to order some heirloom seeds—G. hirsutum with colored lint.

But it turns out that you need a permit to grow cotton in Texas, and purveyors outside of the state will not sell you seed without one. I thought at first, incorrectly, that this was driven by the Big Cotton industry, and was all about patents, and GMO, and other scary protectionist things. But as it turns out, it concerns boll weevil eradication. More on this later—my main point is that I needed a permit, and didn’t know where to turn to get one. I had already made some contacts with the researchers at Agrilife, though, and so I reached out and queried them. They immediately pointed me in the right direction, and then said since I wanted to grow some unusual cotton, how would I like to come down there and pick out some candidates from their seed bank? I was told that they needed to be grown in a greenhouse, though, since the plants required controlled light.

But first (actually, second, since “first” was getting the cotton permit), I needed to get a little more serious about my agricultural set up. This meant plumbing the greenhouse so that I could set up an automatic watering system. Avid readers of this blog (all one of you) know that I am usually a fervent DIYer, but age and some chronic injuries have made me hesitant to tackle some projects on my own. (Also, plumbing almost always turns into a disaster when I try it.) So my neighbor Tim did the plumbing, and Kamron, who occasionally helps me in the garden, dug the trenches. I just signed the checks. It all turned out neat as a pin, with a direct line to both the greenhouse and the hoop house that I also plan to use: 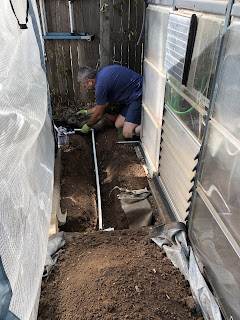 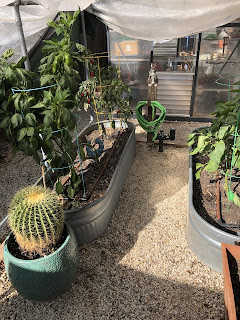 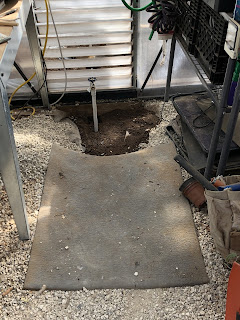 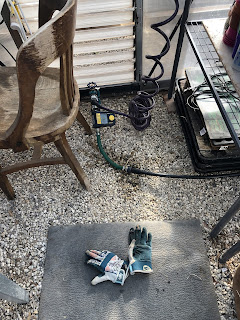 I love this system so much, I should have done it years ago.
Next came the grow lights. Plants, I learned, primarily use the red end of the light spectrum, and modern LED grow lights tend to skew this direction. This turns the little greenhouse into something of an otherworldly sight--a pinkhouse, if you will. The cotton wants more light than that provided by a winter day, so the lights go on at 5 AM, and off again at 8 PM. This is what I see every morning when I go out before dawn to check on my cotton plants: 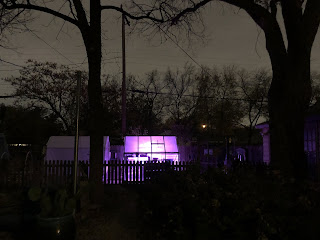 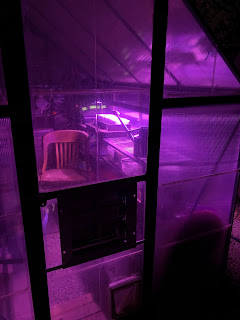 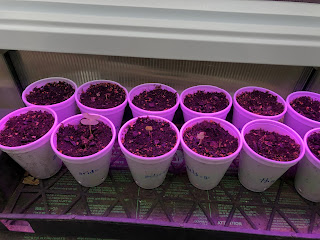 I already had a heater for the greenhouse, though not a very robust one (a new one is on order), and it is controlled by a thermostat. In short, everything is now designed so that I can monitor conditions from my kitchen while wearing my pajamas: 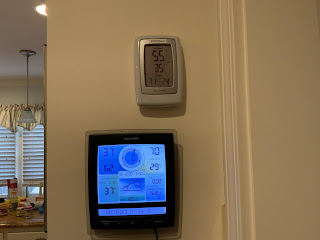 Automated is good when you are an absent-minded, laissez faire gardener such as I (although it turns out that I fret so much about this project, I go out to the greenhouse two or three times a day checking on things; so I probably could have skipped having so much automation). And thus with everything set up, if not to be actually fool-proof, then at least to give me the illusion of such, I went to Agrilife and picked out some seeds.
And that will be my next post.