But to get you started, I'm going to break it down as simply as I can.

First, if we look at a person standing at the end of a street, a block away, that person appears smaller than if he is standing right beside us. We know this to be true. It is also true of an object, like, say, a box. If we are very close to the box, then we might not see that the far end appears slightly smaller than the near end, but it does. If we were to draw the box with all sides equal, it would look funny to us. This is called "orthographic projection": 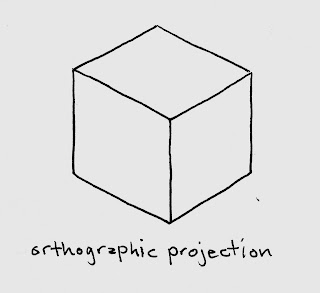 It almost looks as if the box is trying to fall forward, off the page--an optical illusion. But if we draw the box so that the measurements on the far side are smaller--in perspective--the box looks less odd, and more like it is sitting on the ground. Here are the two ways of drawing the box, side by side:

This is a classic example of the tension between drawing what we know to be true (all sides equal) and what we see (things in the distance appear smaller).

To learn to draw things in perspective, it helps to go through some exercises to see how to draw a box from different angles. First, you must imagine that there is a horizon in the distance, and that if something is actually on this horizon, it is so far away and small that you cannot see it anymore. This is called the "vanishing point" (abbreviated in these diagrams as "V.P."). If you place a box in front of you, looking at it straight on, and you could imagine that you could scoot it back toward that horizon line, it would grow smaller and smaller, until finally it "vanished." It would look something like this, which is called "single point perspective":

But we don't always look at boxes (or buildings, or sidewalks, or fence lines...) straight on. Usually, in fact, we are looking at them from one side. When we do this, we have effectively turned the box so that we now have two vanishing points--one for one side of the box that we can see, and another for the other side that we can see. It looks like this:

How extreme the perspective is depends on how far apart we place the vanishing points: 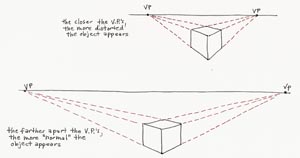 If we want our sketches to look "normal" we probably won't have room on our pages to place the vanishing points, so we have to imagine where they are, off the page.

I have drawn all these images from the viewpoint of looking down on the box. I've drawn them this way for clarity in illustrating how to use the guidelines to draw the boxes. But we seldom see things from this viewpoint (unless we are high in a neighboring building, or standing on top of a hill). More often the horizon line is "eye level." And we also draw other things besides buildings in perspective. Suppose, for example, we were to plant one tree at each corner of a box, and then look at the placement of these trees in perspective? Here is what that "box of trees" looks like, looking at them from both eye level, and from above: 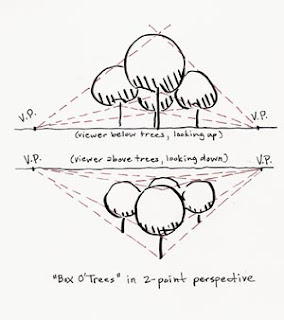 This has real life applications, as shown by this sketch by a former student in this class, Jay Daniel, of the trees in the English/Philosophy courtyard: 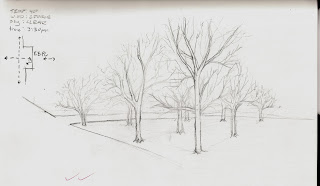 These are the most basic rules of perspective drawing, and once you grasp them, it suddenly becomes easier to see the objects you are drawing in perspective. After you have practiced using guidelines a few times, you will find you seldom need the anymore. However, there are occasions when it helps to use them to draw things that are more complex than simple boxes. For example, you can use guideline to draw evenly spaced fenceposts or trees: 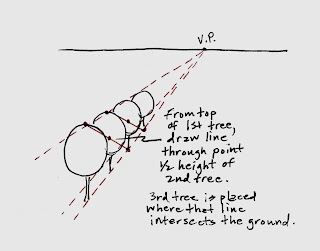 To draw the shadows falling from trees: 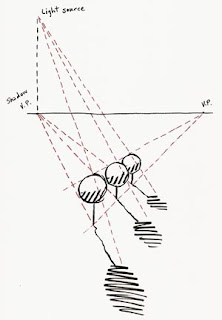 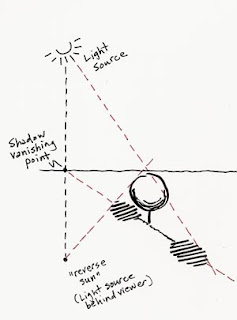 And so on. It turns out that artists have been playing with ways to draw very complex scenes in perspective for centuries. But it wasn't until 15th Century that Italian artist and engineer Fillipo Brunelleschi codified the laws for all the rest of us. Leonardo da Vinci, another artist/engineer. was also famous for his complex perspective drawings: 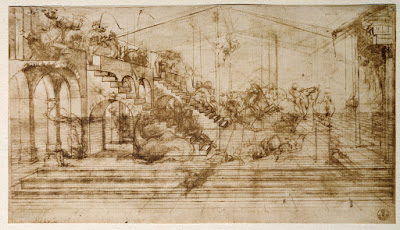 If you are a person who likes puzzles, or making order out of complexity, I urge you to find a book on perspective and start playing around with this ancient art. Or, if you just want to be able to sketch a street scene and not have it look like it is falling off the page, practice until you get a feel for the basics, and then throw out the guidelines. Either way, have some fun.

Look around. Everything you see is follows the principles of perspective. Sidewalk lines. Houses lining a street. Mailboxes in the front yard. People sitting at a dining room table. Life itself.

New comments are not allowed.