I’ve signed a publishing contract for a book about cotton that will be a mix of essays and my botanical art. It’s a long-term project, and I’ve started on it in earnest this fall. There are many things to report, but I’ll start with this, preparing to grow some of my own cotton in the area of the garden I call “the farmlet.” It is the only part of our property that receives full sun, which cotton needs, and normally I use the area to grow vegetables (read: tomatoes and not much else). Next year, however, I am planning to grow some varieties of heirloom cotton to paint. Much to my surprise, when I went to order the seed, I discovered you need a permit to grow cotton in the state of Texas. This is apparently to control the spread of the boll weevil, as this way they can track where it might be. So, with the help of the kind people at Texas A&M Agrilife, I applied for and was granted a permit.

Next on the agenda was to prepare some space for the plants. In addition to some existing beds in the farmlet, I also decided to add some in the alley, and experiment a bit. I’ve been tagging along with a local farm family as they’ve been harvesting this fall (more on that in another post), and they practice dryland, no-till farming. I thought the alley plots might be a good place  to try these things. So with the help of a young man who often helps me in the garden, we got one bed tilled, and another scraped, and then sowed some winter wheat on the surface to create a cover crop. 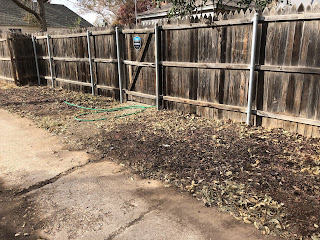 Which a flock of White Winged Doves promptly devoured.

I read up a bit on winter wheat and discovered that a 1.5” planting depth is recommended (rather than just scattering it. That seemed like it would keep the birds from feasting on my nascent wheat, so I created some furrows in one bed, scattered the seed, and covered it. I started to do the same to the other bed (the east one), but discovered that is was chock full of lava rocks. You may remember that some years ago, lava rock was a popular landscape mulch. I had forgotten that a long while ago, a friend wanted to get rid of hers and I told her I would take it. Her husband came over with a load of it in the back of his truck and dumped about a cubic yard that spot in the alley. And over the years, I forgot it was there.

So the past three days I have been digging it out, using a combination of small tiller, various rakes and shovels, and a sieve made from an old garden gate. 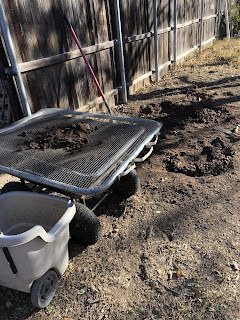 To give you a feel for the scope of this labor, picture if you will a buried swimming pool filled with this: 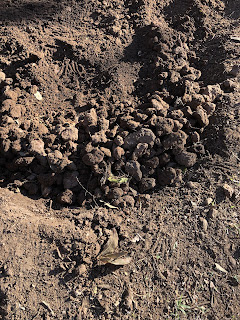 I figure I have maybe one or two more days of doing this before I can get back to re-planting the winter wheat in this plot. However, while I was distracted by the lava rock dilemma, the doves once again discovered the western plot had new seed—only now it was conveniently lined up in some furrows.

I came out the morning after I had re-planted and found neat little furrows, as empty as could be. They all looked like this: 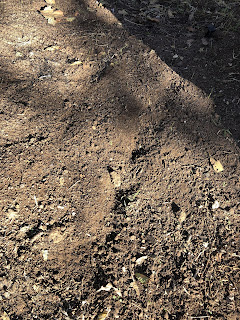 It was sort of like an Automat for birds.

So I re-re-planted the winter wheat, covered it again, and then covered the whole thing with bird nettting. And that seems to have done the trick.

Further notes: the seed comes from a local seed company, and Kamron, my farmlet hand, had to buy an entire bag. So there is plenty to do all the re-planting I need.