Aftereffects of the winter storm (on the cotton plants)

Where to begin? I really need to start a regular posting cycle to keep up with this adventure. So many things have happened, and I haven’t been good at all at documenting them the way I should. So today I will just dive in with the latest. And going forward, I’ll try to set up a routine—maybe posting each Sunday, and see if not only keeps me caught up, but will also help fill in the many things that have already happened. I am so terrible at discipline and routine, though, that I can’t make any guarantees.

This past week was a doozy in Texas, with record freezing temperatures and snow all over the state, all the way down to Houston. And Texas went dark.

The entire state power grid failed, and much has already been written about the epic (and tragic) disaster that followed, so I won’t go into it. However, Lubbock, in a bit of luck, is not currently on the state grid (though we are scheduled to be starting some time next year), so we never lost power. We are also used to freezing temperatures and the havoc they can wreak, so our city managers were proactive and headed off any disasters.

But it was still a strain on the system, and so we were asked to conserve energy where we could. Walt and I already keep our thermostats at 68, but we turned them even lower—64° in the back of the house, where my studio and the bedroom are, and 67 in the front of the house (there are two different furnaces, not that it is interesting).

And in the greenhouse, I turned the thermostat down to 55°. I was hoping this would be enough to keep the plants alive, even though I knew it would put some stress on them. And it did...but I think that some of those single digits days and nights were just too much of a strain. I went out to the greenhouse this morning to check on them, and at least three of the five plants are clearly distressed, so much so that I am pretty sure I am going to lose them. Here is one looking pretty sad: 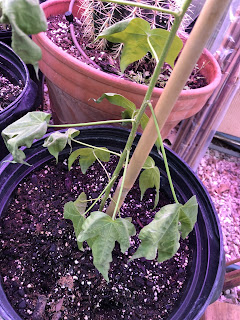 Fortunately, I had transferred three specimens—a representative of each of the species—to the Dr. Xie’s TTU greenhouse. During the worst of the storm, I was getting notices from the university asking researchers to shut down any parts of their labs that were not required to stay open (to save on energy), and other notices about rolling blackouts. So I texted Xie to asked him if the greenhouses were staying open. He said they were, and sent me a photo the next day of the plants and said they were fine (compare and contrast to the one above). So that is a bit of relief. I will try to go in sometime this week to check on them. 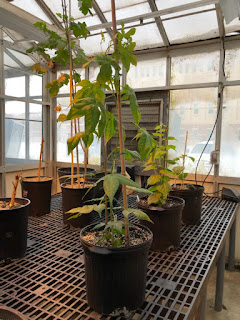 Also, I hope to make a trip out to the Agrilife greenhouse this week, where, I am told, kirkii’s bolls are opening. I have finished the part of that painting of the closed boll (these bolls are pretty small, so I have enlarged the photo). I did two views of it—one with the boll as it normally looks, all wrapped up in its bracts, and one with the bracts pulled away so you can see how unusual the boll is. This will make it slightly different from the other plates, which feature only the open and closed boll. In retrospect, it might have been better to do it the same as the others, and then do a a plate or two comparing the different bolls, without their bracts. Live and learn. 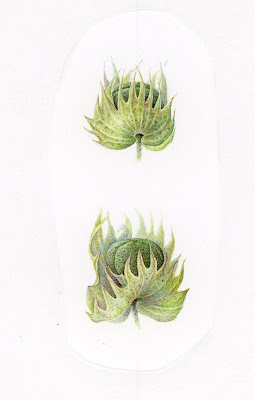 P.S., I have ordered a dual fuel generator so that next time I can keep the greenhouse heated. And there will be a next time. It would be foolish to think otherwise.
at February 21, 2021