Naturalist Notebook: The other side of which lies salvation (using poetry as a self-prompt)

There is a poem by Mary Oliver called "In Blackwater Woods." Please access the full poem in the link below and read it through one time before continuing. I'll wait. 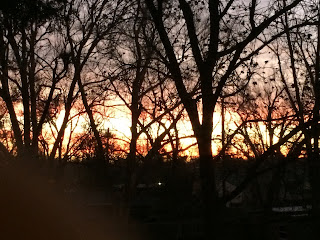 In the poem Oliver is describing a fire in a nearby wood that she loves. It is not immediately apparent to the reader, however, that this is what she is talking about. Instead, she gives us clues:

Look, the trees
are turning
their own bodies
into pillars

So we might ask, the first time we read this, What is this about? How can trees turn their bodies into light? And why a pillar? We know that a pillar is a tall, slender structure, used for support, or as a monument of some kind, so why this word?

In the next stanza, there is another clue that this is a fire as she writes:

long tapers the
of cattails
are bursting and floating away

Many of us are too young to have needed candles for much of anything except decoration, so we can be forgiven if we do not know that a "taper" is a kind of long candle. She has used an old word, then, to describe cattails as candles, bursting and floating away. There is value in reaching back to old words; it can remind us that these things have happened before. This idea also becomes part of the poem:

Every year
everything
I have ever learned

And though she overtly names this as a fire in the very next stanza, and we can now see how clever she was with her word play, it is not the real meaning of the poem. The lines above, coupled with the lines below tell us what she is really thinking about:

in my lifetime
leads back to this: the fires
and the black river of loss
whose other side

Go back now and read the poem again before continuing. I'll wait.


If you have read poem again, then by now you should realize why I have chosen this poem for this time. I discovered it several years ago, and like to come back to it for the reminder that there is also salvation on the other side of loss. In this challenging time in which we are living, perhaps that salvation can be an awakened compassion, a bravery, a chance to show leadership through calm.

Here is how I sometimes like to use poetry for writing prompts about nature, using this poem as an example:

1) Metaphor. In this case, we can look at the example of trees turning their own bodies into pillars of light. When you go out into nature, what can you see that can be used as a metaphor?

2) Word play. Again, using the example of this poem and the idea of cattails, which are shaped like candles, and actually calling them a kind of candle. Make a list of the things you can see: birds, kinds of trees, flowers, the land itself. Are there other words that can describe them? Remember also the poem we read about "Birds of Prayer" and the way that is a play on the words "Birds of Prey"? Don't expect this to come easily, but then, if it were easy, anyone could do it (who first said that? Hint: Not Billie Jean King, but someone related to her.)

3) Use the idea of a poem itself. In this case, the idea is that there is salvation on the other side of loss (there are other ideas in this poem as well, including the instructions for life which Oliver gives at the end). What examples can you think of from your own life?

Poems are great ways to look at the world in a different way, and isn't that what this course has always been about? I encourage you to learn to read poetry. Stop trying to see the meaning of the poem in the first pass. Look for the clues the poet gives us. Great poems are like unwrapping a gift, one layer at a time, and often, the more layers to the poem, the greater the gift.

Try either writing a poem about something in nature in the context of what you are experience now. Or, find a poem that speaks to this moment in time and analyze it the way I have done with Mary Oliver’s poem. The best poetry reveals itself in layers—unfold those layers one by one.

Finally, I have a treat! Here is an excerpt from a poem by a former student in this very class, Dr. Clara Vadala, who is now a practicing veterinarian and a many-times published poet. Clara wrote this about this course on my Facebook page recently: “I would take the (Naturalist Notebook) class a thousand times! That is where I learned to actually journal and the tools I learned are what led to my first book! And I am not exaggerating!”

Here is an excerpt from a poem in her most recent book, Beast Invites Me In:

“Lulu turns to leaves in the sun”

There is an old energy
that curves things
the shape of sleep.
The old dogs know it best.
Near the end, their whole old
bodies bend in dirty circles,
knobbled bones croaking,
the keen cold creeping. Despite
ache, age, they yip, spin, fling dust,
make ceremony of themselves.
at March 20, 2020