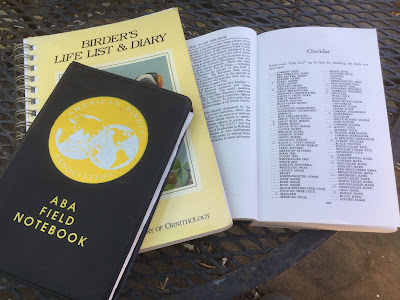 This next module is both easy and challenging. On the face of it, it can sound very simple, and perhaps not that interesting. But many people, once they get into it, begin to see it for the fun game that it is. I’m talking about keeping a birding life list. Simply put, a life list is a compilation of all the species of birds you have seen, and the date and place you first saw them. There are many variations on the life list that you can have. Some people keep a “yard list,” that is, all the birds you see over a lifetime in your own yard. Nearly every serious birder has a yard list—it is often how they got interested in birding. And “birding” is different from “bird watching” because it is in large part about participating in the listing game, whereas a bird watcher is mostly just interested in watching birds. But there are birders who are bird watchers, and vice versa. When I started out, I was a birder, in large part because I fell into a group of local naturalists who were very serious about the game. Over time, I let my list slide, and became more of a bird watcher.

It started out as a hunting game—to see how many birds hunters could kill on Christmas day—but over time, as the cost to the population of birds became clear, the killing turned to counting, and in 1900, the Christmas Count was born, the brainchild of ornithologist Frank Chapman. The Christmas Count in turn has spawned all kinds of listing games.

Most birders keep a yard list, but they also keep a city list, county list, state list, North American list, and World list. And there are even variations on these, mostly constrained by time limits. For example, most birders keep a list of how many species they see in a year, called, predictably, a “year list.” Some birders who are very competitive will sometimes go for what is called a “Big Year,” where they are competing to see who can see the most number of species in a geographic region (such as North America or the world) in a single calendar year. There are even competitions for “Big Days.” At the top of the game, the birders are very, very, very good. They know the species they are looking for so well that they can predict the date, time of day, and location they can expect a high probability of seeing a certain species, and they map out their game plans accordingly to maximize the greatest number of species they can see in a time frame. It is not at all unusual in big day competitions for teams to go twenty four hours without sleeping.

The top birders all have North American life lists that are at least over 700 species, and it is usually usually much higher than that. In the North American Big Year competition, the top competitor for 2019, John Weigel, saw 837 species.

In a single year.

I will tell you flat out that birders can get crazy nerdy doing this. In fact, there have been books and movies made about about wacko they are with all this listing business, including this one, starring Steve Martin, Jack Black, and Owen Wilson: The Big Year

If you are looking for something to stream to pass the time, you might consider watching this movie on Prime, which is funny as well as a true story of three real people competing to see the most number of species in a single year.

(By the way, the movie is based on a non-fiction book that follows the three competitors over the course of the year, and as is often the case, the ook is better than the movie. If you think you are interested, skip the movie—read the book. It gives much better background and infomration.)

You don’t have to go off the rails with making a life list. But I do encourage you to start one and see if you enjoy it. Playing the listing game is probably the single most important thing that set me on the path to becoming a naturalist. And even though I eventually stopped listing (because I had transferred my list to a software program that crashed and I was too daunted by the task to re-create it), it left me with a knowledge and love of birds I otherwise might never have had.

There are many ways to keep a life list, including special, often pricey software programs (but be sure to back them up!). But you can also just start with making notes alongside the species in your field guide. This is the way I started out, and it worked for a good long while...until the field guide was updated, and I had to transfer my list. This was manageable until I got up into the hundreds of species range. I found that one of the most expedient method for me was a dedicated birders life list/diary, like the one shown in the photo at the top of this post. These not only have a list of the species that occur in North America, they have spaces for notes as well: 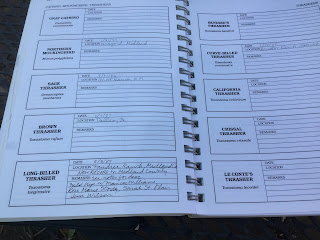 But in my heydey, when I was actually starting to travel around with friends just for the express purpose of adding to my life list, I kept a simple check list, like this one at the back of an ABA (American Birding Association) field notebook: 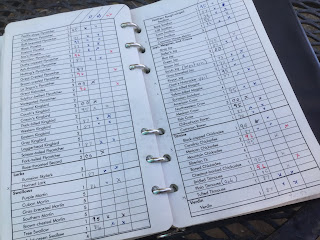 There are many versions of birders’ journals available on Amazon, should you decide to get serious.

For this module, I would like you to start by going through the lists of birds you have already compiled, and come up with an organized way of creating your life list. Then I would like to participate in the listing game by trying to see how many new species you can add to that list by the last day of class. (So this is the module you would turn in during the last week.) Remember to include date, time, and place in your list.

The rules I learned for listing a new species is that it has to be a bird that you can identify yourself, and that you actually see it well enough to identify it. In other words, you can’t just be in a group and hear someone call out a bird they see and then count that. You can also count birds that you identify only by sound. There are ethical reasons for doing this—some birds are very shy, and in order to see them you would have to harass them, and cause them stress. So the American Birding Association allows for counting birds (for examples, owls), even if you have only identified them by sound. And speaking of the ABA, if you really get interested in listing, then you should look into their organization.

That’s all the info you need. If you are still able to get out to some parks, then do so, but even if you can’t, you can use those binoculars to see how many birds come to your backyard. You can even set up a feeder. If you do, look for bird feed that is black oil sunflower seed—it will attract the most species. Feed that is mostly millet will only attract house sparrows and house finches. And all species like some water in the yard, especially if that water is moving. So consider setting up some sort of simple bird bath. If you do this, be sure it is away from shrubs that can hide cats and other predators. When birds’ feathers are wet, they are not able to fly as fast, so they will not come to water where they cannot see if there are predators.